This was before DJ Woodhead. Mr Smith from SCS Law represented the claimant. Mr Wilkie represented the defendant.Several items had been identified in the skeleton, including that the claim should be for trespass, not breach of contract, and the fact the the tenant of the property had "exclusive" use of the parking space, with no mention of parking restrictions in either the lease or the tenancy.UKPC tried their arguments of Authority, Beavis, Lease binding tenant etc.But the case fell down because the UKPC contract was with the "Gate Residents LTD" while the agent was the "Gate Residents COMPANY Ltd, and additionally there was no chain from the Leaseholder or the Freeholder toUKPC. This "troubled" the judge, and she gave the other side every chance to show how she should proceed - they couldn't, so the claim was struck out.
There were no costs, but as the claim was for £5300 claim, the defendant was not unhappy.
Prankster Note

It seems that Gladstones are not the  incompetent solicitor's trying to scratch around for parking business. UKPC have been well and truly stuffed by SCS Law. A competent solicitor would have done proper due diligence before the claim was issued and advised their client of the dangers of proceeding.

We have issued over 2000 legal proceedings in 2016 in relation to parking tickets and attended over 4000 hearings representing parking companies at court.


This does appear to be somewhat fanciful as this appears to be more than the combined number of hearings for BPA and IPC companies (row 82 is largely MIL) shown in the graph of hearings (not claims) below. However, perhaps The Prankster's data is incomplete. SCS Law are a trading name of LPC Law, who handle ParkingEye hearings. 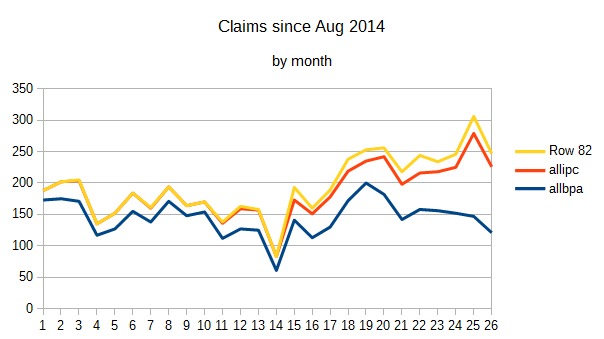 They do also offer an undisclosed volume discount for repeat business.

It is therefore unclear how much UKPC paid out, but the Prankster expects from the above price list that costs will be somewhere between £300 and £600.

Posted by Parking Prankster at 09:04