Nick Abell is the Chairman of debt collectors Wright Hassall.

Under his leadership the POPLA brand has been irreparably tarnished and the legacy put in place by Henry Greenslade has been thrown away in little less than a year.

Leaving aside to impossibility of pretending to run a fair appeals system when the company acts as an aggressive debt collector on behalf of parking companies, under Nick Abell's leadership POPLA has descended into a farce, with assessors either incompetent or institutionally biased or both.

POPLA is now churning out template appeal verdicts without apparently considering the actual grounds of appeal and ignoring any appeal points they are unable to dismiss.

Wright Hassall's competence as debt collectors is also suspect. They are not members of the Credit Services Association, but the Prankster suspects that if they were, they would have been thrown out due to the multiple code of practice breaches their misleading and untrue letters create. It appears Excel Parking have come to the same conclusion, having ditched Wright Hassall for BW Legal, another bottom feeding debt collection company who believe the code of practice is 'more guidelines than actual rules.

In this case, UKPC faked photographs to pretend the victim was at the car park for longer than she was. You may remember this case, because The Prankster reported on it here.

UKPC were suspended from DVLA access as a result of this case. Somehow this case has now got resurrected at POPLA.

Any competent assessor, knowing UKPC's history, would not believe the timestamps on the photographs and would take great care to check other evidence such as shadows.

Embarrassingly the Wright Hassall anonymous assessor has shown their incompetence and institutional bias by believing the operator, despite their  history of fraudulent behaviour. 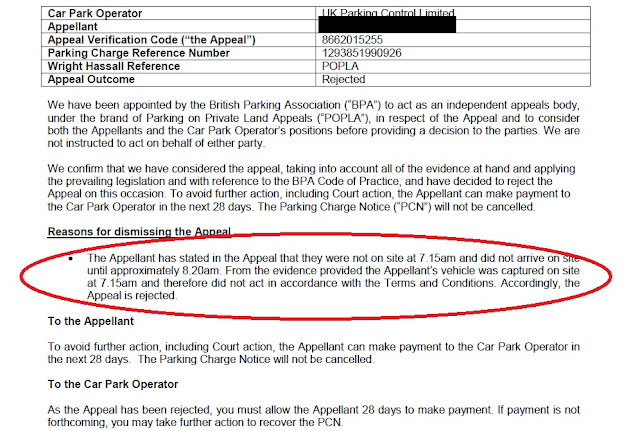 ISPA are the board which oversees POPLA. The chair and deputy chair have both recently resigned, and while The Prankster cannot say this is due to the appointment of Wright Hassall, The Prankster would comment that a oversight board which does not have the funding or powers to act is essentially toothless.


Posted by Parking Prankster at 02:39