I wish to draw your attention to the procedural impropriety in your operational activities on the approach roads within Liverpool John Lennon Airport.

You are actively operating under contract to issue civil penalty tickets (PCN’s) for traffic offences on the roads such as stopping at the roadside, whether for seconds, minutes or even longer, or for parking on the roadside verges.

You are doing so based on an allegation of contractual agreement for a breach of parking conditions and are actively sending out a notice to keeper in each case where you ask for the name and address of the driver. You are doing this under the provisions of the Protection of Freedoms Act 2012.

As you are no doubt aware, due to your many years of experience in emptying people’s wallets, where land is governed by byelaws the remedy for any breach of conditions of those byelaws is through the criminal courts, such as a magistrates.

Not only that, since the byelaws set an amount of penalty for failure to comply with them; a further amount based on your own assessment is unlawful at best and perhaps even fraudulent.

A set of the byelaws for the Liverpool Airport have now been obtained from a reliable source, Liverpool City Council,  which sets out the airport’s stance on roadway use, or misuse. It also lays down a penalty upon summary conviction for a breach of the byelaws of £5 for the 1st offence and a further amount of 40 shillings for a continued daily breach.

I put it to you that these byelaws govern the airport’s penalty regime for the alleged contraventions you are enforcing. In fact there is no penalty for stopping at the roadside. There is no offence committed so there can be no penalty unless it can be proven in a magistrate’s court that this action amounted to a failure under para 14: “Driving or placing a vehicle carelessly or dangerously or without due consideration for persons using the airport”

Para 18 gives notice that a “failure by the driver of a vehicle to comply with any direction for the regulation of traffic given by a constable or any person acting on behalf of the council or a traffic sign” will be subject to the penalty regime of the aforementioned £5 plus 40 shillings per day afterwards.

The mention of the traffic signs and the council's part in the overall monitoring means that the signs must be compliant to the TSRGD which are those shown for the public highways; not the ones arbitrarily stuck at the roadside by yourself which are meaningless in the context of the legal status of the byelaws.

Furthermore, POFA 2012 3(1)(c) states that Schedule 4 only applies on land on which the parking of a vehicle is not subject to a statutory control. It further states (3)For the purposes of sub-paragraph (1)(c) the parking of a vehicle on land is “subject to statutory control” if any statutory provision imposes a liability (whether criminal or civil, and whether in the form of a fee or charge or a penalty of any kind) in respect of the parking on that land of vehicles generally or of vehicles of a description that includes the vehicle in question.

The byelaws state at para 2.19 that the following act is prohibited.

"parking a vehicle elsewhere than in a place provided for that purpose."

The penalty for this is a fine not exceeding five pounds.

Knowingly pursuing the registered keeper when POFA 2012 is an offence which the DVLA take extremely seriously and may ban you from access. The BPA wrote to you in their electronic newsletter this month reiterating this.

I put it to you, Mr Renshaw Smith, that your company is operating unlawfully at the Liverpool Airport site and ask what you intend to do since this has now been brought to your notice.

May I remind you that since this is an unlawful operation, you may well be required at some later time to recompense the amounts of the PCN’s already paid by drivers, and perhaps face tough questions in a court of law, not just a civil court. 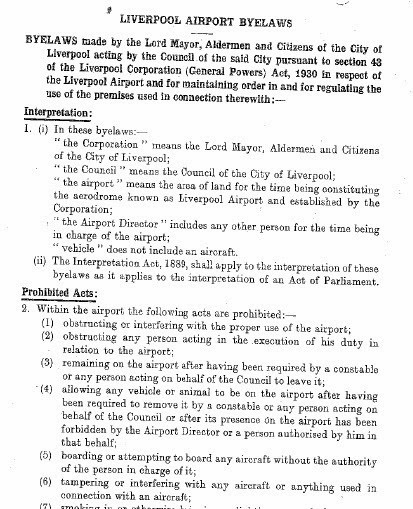 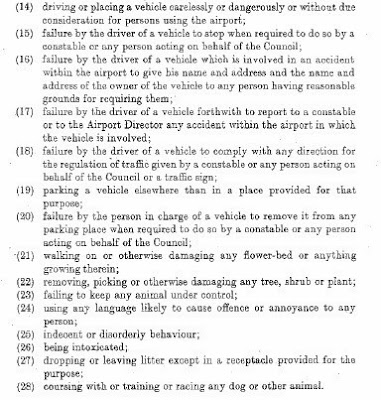 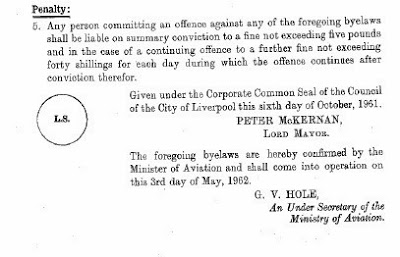 Happy Stopping Briefly At the Roadside

The Prankster would like to thank his source for the above

Posted by Parking Prankster at 07:48