Proserve lost in court today. This puts 700 other claims at risk.

Their business model works as follows.

1) They persuade a landowner to enter a contract with them whereby the landowner pays Proserve a large amount of money if a trespass occurs. This money is not connected to the actual costs caused by any individual trespass. According to their court papers, this contract is to provide parking enforcement services.
2) They erect signs warning motorists they will be charged for stopping. The signs are so complex you can only read them if you stop. 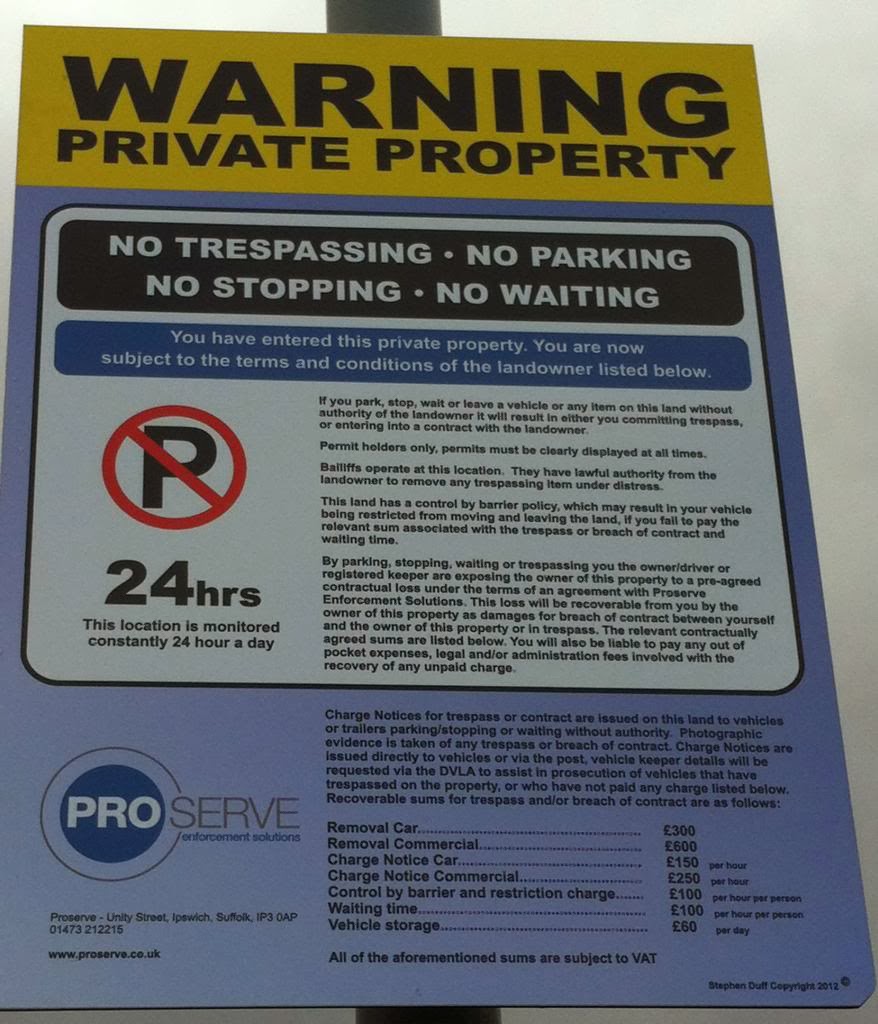 3) If you stop, a Proserve operative photographs your vehicle and then on behalf of the landowner makes an application to the DVLA for keeper details due to trespass.
4) Proserve are not a member of either of the two Accredited Trade Associations (the BPA Ltd or the IPC Ltd). They have therefore told the DVLA they do not provide parking enforcement services and are requesting the data for trespass.
5) Because they are not an ATA member, they have to submit paper applications, which take a while to process.
6) They therefore almost never get a Notice to Keeper to the keeper within the 14 day timescale required by the protection of freedoms act, which means only the driver can be held liable. To counter this they send a document to the keeper explaining that the government got it wrong and the 14 day limit does not apply after all.
7) Proserve explain to the keeper that as the motorist trespassed, the landowner now owes Proserve money; as the landowner has lost money due to trespass, the keeper must reimburse the landowner; Proserve are acting on behalf of the landowner to recover that money; once the keeper pays up, Proserve can give the money to the landowner so they can pay it back to Proserve.
8) At this point in time though, no money has changed hands and Proserve have not even invoiced the landowner. Proserve only invoice the landowner once the motorist pays up or if they decide to go to court.
9) If Proserve and the landowner decide to take the keeper to court, Proserve invoices the landowner and the landowner immediately pays up. Proserve can then file the invoice and payment as evidence in court.
10) In court, Proserve (acting on behalf on the landowner) asks for the money as a claim in contract even though they told the DVLA they would only use the data to pursue claims for trespass.
11) They are asking for damages to cover such items as kerb repair and Proserve costs. However, in court they produced a document showing the occupants of the landowner's estate pay a service charge to cover Proserve costs and are also responsible for estate upkeep.

Not surprisingly the judge found the whole thing fishy and dismissed the claim.

The landowner has decided to appeal. This is not surprising. If the result stands, they will be in an uncomfortable position. Large numbers of motorists will have paid them money which can now be reclaimed. This will leave them out of pocket, because it is unlikely that Proserve will reimburse the landowner. The landowner has also been adding VAT to the damages, which is not allowed. HMRC may well therefore be interested in reclaiming about £20,000.

Proserve are not laughing all the way to the bank though. As they have been deceiving the DVLA according to their own legal submissions, it is likely that their access to the DVLA database will be suspended, curtailing their operations. They are requesting data from the DVLA on the grounds of trespass, but are taking court action on the grounds of breach of contract. The court agrees the ground are breach of contract, if anything. By deceiving the DVLA in this way they sidestep the requirement of all parking operators to belong to an ATA. This means that their charges are far more than the maximum allowed by ATA's, and also means they do not have to provide access to an independent appeals service. This means they can turn down all appeals without really caring about the appeal content. it also means they are competing unfairly with all ATA members who have to pay large charges such as ATA membership fees, POPLA fees, etc.

Lastly, it seems that Proserve's Mr Duff has been impersonating a Mancurian lorry driver on pepipoo, in an attempt to try and persuade posters that Proserve's operation was legal. He was discovered when he provided information only Mr duff or the defendant would have known. Suspicions were already raised for some time when his posts morphed from worried lorry driver to armchair lawyer in the space of a few days.


Posted by Parking Prankster at 14:05