How Parking Operators use ANPR

This article explains how parking operators use ANPR (Automatic Number Plate Recognition), answering some common questions and showing how problems may arise.

A typical modern ANPR system will comprise of a digital camera with extra hardware and software which can recognise number plates. When a number plate is detected an image is recorded and stored. The numberplate is decoded using OCR (Optical Character Recognition) and this is stored along with the date and time of the image. This can be used to deduce entry and exit times to a car park and thus the duration of stay.

ANPR systems need to work at night as well as in the daytime; in good weather and bad; in rain, mist, fog and snow. For this reason, they do not just use the same spectrum our eyes use; instead, they also use the infra-red or near infra-red band. This works at night and also works well in bad weather conditions.

This also explains the photographs you will see on a typical parking charge. If the photograph is at night, all you may see is a blurry car with headlights and no visible numberplate. This is the image taken using natural light. Below that will be a small box with the numberplate; black letters on a white background with the fixing pegs also showing in black. This is the infra-red image. It may also be digitally enhanced to sharpen the font or to straighten any skew. Alternatively the operator may just provide you with the infra-red image.

This explains why in some photographs the rear numberplate does not appear yellow, why the fixing pegs are so visible and why the font might appear exactly the same as it looks to the naked eye.

The ANPR system has to solve two basic problems. First, it has to recognise that there is a number plate in its field of view. Then it has to decode that number plate. Both of these are subject to error. Several published studies are available, variously quoting the success rate as between 93% and 98%. Not all of these studies are for car park situations; some are for fast moving vehicles where the problem is slightly harder doe to speed.

Another, bigger problem is character recognition. Certain characters, such as the letter 'oh' and number 'zero' can be easily confused. One study indicated that 10 characters caused over 55% of the misreads, and that the two most common causes of misreads were fixing pegs and marks.

A third problem is coverage. The cameras only have a limited field of view, so if the road is wide two, three or more cameras may be needed to ensure that wherever a vehicle drives the numberplate is detected. Most cameras have a width range of 4m although some more expensive ones go up to 12m. 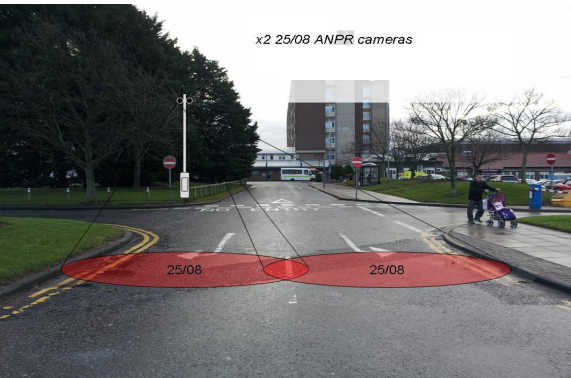 A fourth problem is that the cameras do not have x-ray capabilities! if a pedestrian crosses the road or a vehicle drives close to the one in front then the camera will never see the number plate at all. This problem can be lessened by siting the cameras as high as possible, but this increases the skew problem.

A fifth problem is drop-out. If any one part of the whole system stops working for any period of time, then some images might not be recorded. A car could drive in and out of the car park and not be recorded.

A sixth problem is related to timestamps. If more than one camera is used, the clocks may be out of synchronisation. There has been at least one reported occasion where one camera was recording at GMT, while the other camera was using summer time, thus adding an hour to each visit.

A seventh problem is that the times recorded are entry and exit to a car park, and not the actual duration the vehicle is parked. This can cause a parking charge to be incorrectly issued when delays in parking or leaving the car park occur. Some car parks can take half-an-hour to leave at busy times; car parks near football grounds can be especially problematical.

The main problem reported with ANPR technology is multiple short visits being recorded as one long visit. This results in a parking charge notice being issued when it should not. It is easy to see how this problem can occur.

ANPR technology is not the same as CCTV technology; it does not record a continuous stream of images. Instead, a photograph is only taken and recorded when a numberplate is detected.

There are three separate situations to consider; character misreads, numberplate misses and misconfiguration.

If a character misread occurs, the operator can detect when a motorist complains by searching through their log for a numberplate which is similar to the missing one. Although in theory time consuming, in practice this should be easy because only unmatched numbers need to be searched.

In a misconfiguration situation, the operator has their software configured to record the duration of stay as the first entry and last exit, and to ignore entries and exits which occur in between. This should also be easy to detect on investigation.

Number plate misses are a bigger problem. As the system only records information when a number plate is detected, the operator will have no record on their system of that particular entry and exit, so no matter how long they search their database they will never be able to resolve the problem. Some operators acknowledge this is a problem and are receptive. Others bury their head in the sand and pretend the problem does not exist.

The most likely cause of number plate misses is a close following vehicle obscuring the number plate, especially a lorry, van or other high sided vehicle. This will be more common in times of traffic congestion. This will also be more common in car parks where high sided vehicles are common, such as motorway service stations. In cases where large numbers of incidents are reported in one car park it is also possible the operator has misaligned the cameras so they either do not cover the entire road or that the camera is not high enough.

In some reported situations the operator has neglected to place cameras on all entrances and exits. Operators often forget service roads and internal entrances/exits. In other cases there may be no well defined barriers to the car park, so if a motorist chooses to exit in a non-standard way, they will not be recorded.

In one reported situation an operator was recorded issuing a charge when the two visits were on opposite sides of a motorway service station - a clear example of misconfiguration.

How Operators can Improve

Currently many operators pretend the double visit problem does not occur. They need to be more open about the problem and accept that it happens. As neither side is likely to have conclusive evidence, the operator should be more willing to cancel charges when a motorist explains they have visited twice. In one reported case an operator refused to cancel a charge even though six witness statements that there was a double visit were provided by the motorist.

Operators can also look to improve their systems. Burying an induction loop at the camera points is fairly cheap compared to the overall cost. The loop will cost around £100, and the installation another £250. The loop will detect any vehicle passing over it and can be used to trigger a photo capture whether or not a number plate was detected. When a motorist reports a double visit the operator will then have photographic evidence they can search through to confirm this.

Putting a barrier at the entrance and exits is the best solution, but not always possible. With a barrier system it is not possible to enter or leave without the number plate being recorded. Moreover, the camera can be placed at the barrier, low down and is closer and has less skew than a pole mounted system. It can therefore get a more accurate read. This system is often used at airports.

How Motorists can Improve


In situations where you know you are visiting a car park twice you can often quickly and simply gather evidence that you are doing this. For instance, if your phone has a camera you can take a picture of your car outside the car park. Many phones have a GPS option which will add date time and place information to the picture, thus proving the vehicle was not in the car park.

If you are at work you could send an email to somebody  (even yourself).


Hi, I'm just visiting a car park for a second time, so letting you know in case their ANPR system has problems.

Emails are tagged with the IP address of the sender, which places you at a specific location. If you already sent any emails, you do not need to do this, as long as you keep your sent emails for a period of at least a few months.

If your phone has mapmyrun or similar application, you can record a short GPS log of your location.

This type of evidence can then be sent to the operator if they incorrectly send you a charge, which will allow both parties to quickly resolve the issue.

When you enter or leave a car park, leave gaps to the vehicle in front so your numberplate is visible. Obviously you are reliant on the driver behind also leaving a gap. Drive in the centre of your lane to maximise your chance of being in the sweet spot of the camera.

Always enter and leave by regular exits. Don't use service lanes or just drive out over a kerb (even if you have a 4x4!)

Keep your numberplate clean. Make sure that there are no marks on the plate and that your plate is not covered or obscured.

Consider buying a dashcam to always record your driving - these can also be useful evidence if you ever are unlucky enough to have an accident.

Posted by Parking Prankster at 01:31