Alexander John Owens LLB is an ex-senior investigating officer with the ICO (Information Commissioners Office), and is the same 'Alec' Owens who testified before the Lord Leveson inquiry on Operation Motorman. You would therefore expect him to be something of an expert on data protection.

Several months ago he helped a colleague who visited a service station twice but was issued a parking charge by ParkingEye for one long stay. He advised the colleague to write to ParkingEye, explain what happened and bring to their attention this obvious technical error with their system. He also expected ParkingEye to rectify the problem to ensure it could never happen to any other innocent motorist. The charge was duly withdrawn.

More recently his daughter experienced the same issue. She regularly travels past Welcome Break Charnock Richard-Chorley in the morning and often pulls in for a coffee or petrol. She was therefore distressed to receive a parking charge notice accusing her of staying for over 48 hours at the services. Obviously ParkingEye's systems had failed again.

This is a fundamental problem with ParkingEye's ANPR systems compounded by their failure to use industry available methods to prevent this happening. Numberplates can be misread for many reasons, including good weather, bad weather and ParkingEye's systems inability to cope with the position of numberplate fixings.  The most common reason for failure is a close following vehicle which obscures the numberplate.

This example from a ParkingEye charge notice illustrates how it happens. If the following car was a bit closer, the numberplate would have been obscured and its entry missed out. The same would have happened if the car in front was a van or lorry - the straighter back would cut out the last few letters of the plate.

This is especially prevalent at service stations where vans and lorries are more common than at for instance retail shopping car parks.

Essentially the problem is caused because the cameras are not high enough, and are not pointed down at a steep enough an angle. The higher the camera, the less chance the vehicle will be obscured. Of course, it still could be obscured. The ultimate solution, as used at Bristol Airport drop off, is to use barriers on entry and exist that read the numberplate before the barrier raises. However, barriers are not practical in all situations. A cheap and easy alternative is to bury an induction coil in the road and take a series of photographs each time a vehicle passes, whether or not a numberplate has been read. This would provide a failsafe record so that parking company employees could check these photographs and not issue a charge if any doubt is present.

ParkingEye are of course well aware that their systems have a problem. They record instances of vehicles arriving without apparently leaving and leaving without arriving. These are caused by failing  to detect either an entry or exit. The number of these mismatches gives ParkingEye an estimate of how good or bad their system is at each site. Large numbers of mismatches mean the cameras are faulty or badly positioned.

The Prankster has previously reported on a victim accused of staying a long time in a car park. They withdrew the charge when the victim send them the tracker data from their vehicle, proving it had visited twice.

The Prankster has also reported on a victim issued a ticket for arriving at a service station on one side of the motorway and leaving on the other!

Despite knowing their systems are faulty ParkingEye continue to issue charges and even pursue victims to court. In their court documents they try and obfuscate matters and bamzoole the judge by referring to the accuracy of the timestamp. 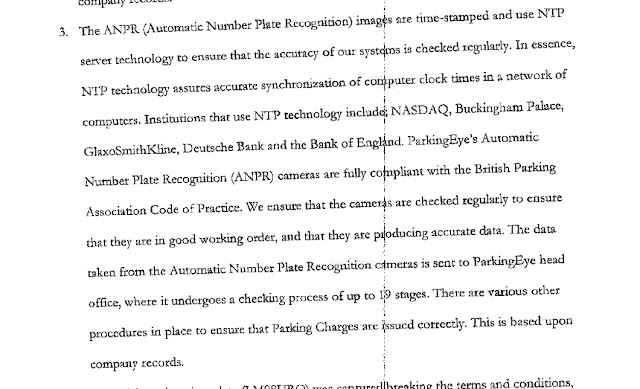 The 19 checks do not appear to be particularly robust. The Prankster has helped with one case where ParkingEye told POPLA that a motorist had only visited once. POPLA believed ParkingEye and refused the appeal. However at the letter before claim stage they claimed the motorist had visited twice. After pointing out this failure in their 19 stages of checking, ParkingEye dropped the charge. No doubt many other innocent motorists without the Prankster's help would have caved in and paid the charge.


The situation therefore is that ParkingEye are both negligent and reckless when they apply for keeper data from the DVLA in the full knowledge that their systems are faulty and that they have done nothing to prevent these errors. These are offences against the data protection act.

Mr Owens therefore wrote to ParkingEye, and will be lodging complaints to the DVLA and ICO. His letter follows. 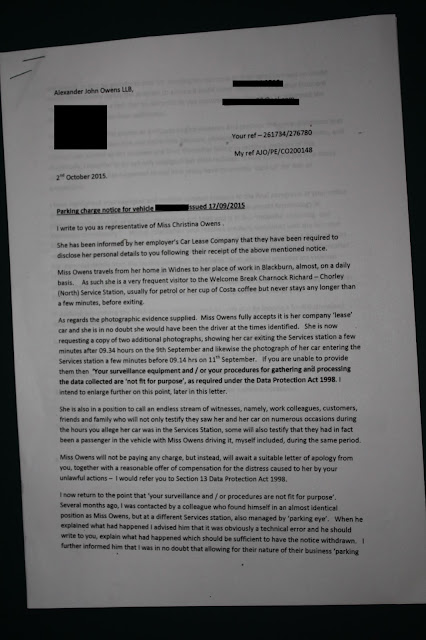 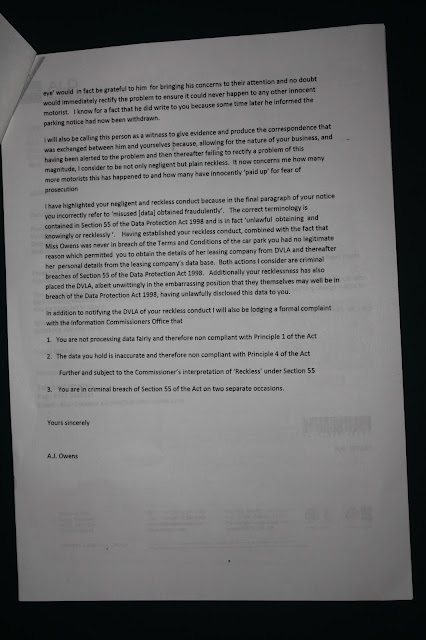 Mr Owens obviously knows a thing or two about data protection. The Prankster therefore advises other motorists whose data has been recklessly accessed when it should not have been to consider following his lead and complaining to the ICO and the DVLA. They should also consider requesting compensation from the operator under section 13 of the Data Protection Act 1999.

Now that Mr Owens has informed the DVLA of the problem, they will be similarly negligent and reckless if they keep issuing keeper data for ParkingEye queries without putting checks and balances in place.

The problem is not confined to ParkingEye or to ANPR systems. ANPR Ltd, who have since been expelled from the British Parking Association, have been known to request keeper data and pursue the keeper even when the driver has previously written to them confirming they were the driver and giving their address.

In that circumstance there is no legal reason to request keeper data because the keeper is not liable for parking charges if the driver name and address is known before proceedings begin.

The problem is also not confined to BPA (or ex BPA) members. Parkshield Collection Ltd, an IPC member, also have form for pursuing the keeper when the driver is known to them. This is an offence under the IPC code of practice which can  result in 6-12 sanction points.


Posted by Parking Prankster at 09:55