The Parking Prankster has been made aware of a new FoI request showing the number of court claims won by ParkingEye.

The Prankster freely admits he might be interpreting the figures incorrectly. ParkingEye can feel free to update him with the correct figures if he is wrong.

Hearings marked with an 'O' are apparently 'Claim Dismissed'. They may include other categories as well, but The Prankster does not know what these would be. He has therefore assigned all these to ParkingEye losses. The Prankster has also attempted to match up known ParkingEye losses with the data. This was partially successful. In one case the claim was marked 'X' as not recorded yet, and in the Lemon and Harris case there appeared to only be one claim recorded instead of two.

Based on these adjusted figures, The Prankster has come up with the following graph. 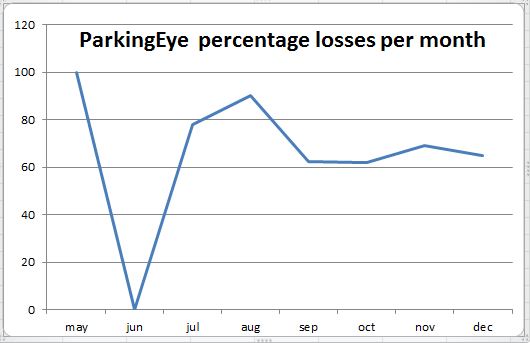 The data behind this is as follows.


If The Prankster is correct in his assumptions, the following paragraph is true. If not, this is a situation known in the parking world as 'telling ParkingLies'

ParkingEye's infamous claim that they win 90% of cases was only applicable in August. After that the percentage of cases won per month has hovered between 62% and 69%. This means ParkingEye win less than 2 cases for every 1 case won by the motorist.

The Parking Prankster has seen transcripts of case won by ParkingEye and can quite understand why they won - the defence was poor or non-existent.

If you are defending a ParkingEye claim and they quote cases they won, you should immediately ask them for all transcripts quoted. These will provide you with a good lesson on how not to conduct your case at court.

Posted by Parking Prankster at 11:45