The Parking Prankster has learned that parking operator UKCPS has been handing out fake POPLA codes. This is apparently a cynical move on UKCPS's part - handing out a fake POPLA code will mean it will be rejected by POPLA and may then mean a valid appeal cannot be lodged within the timescale or that the motorist will simply give up.

How to recognise a fake POPLA code.

All genuine POPLA codes are 10 digits long, and their format is described in a previous post. The fake POPLA codes are 9 digits followed by 1 letter. They therefore fit on the form, but will of course always be rejected by POPLA. 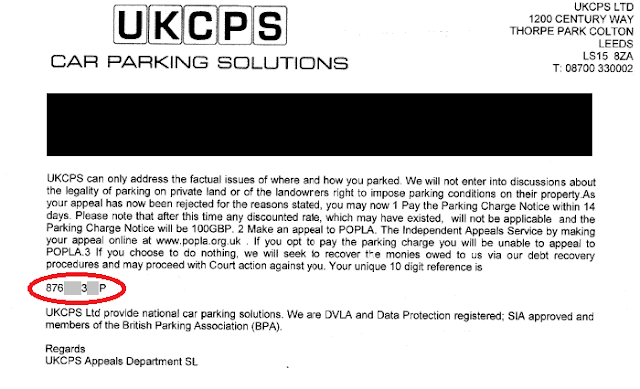 The last 3 digits are your place in the number of appeals UKCPS turned down that day. 'P' is therefore obviously invalid and there can be no justification for UKCPS trying to manipulate the system in this way.

It is noticeable that the instructions UKCPS provide for using POPLA only mention the online appeal service. Appealing online will of course fail to even get the appeal registered because the POPLA code is not valid. All rejection letters should also contain details on how to appeal by post - it cannot be expected that ever motorist has access to a computer. Appealing by post will at least get the appeal logged by POPLA.

As a further example of UKCPS's attempt to bend the rules, The Prankster has seen the full unredacted latter and can confirm that the POPLA code was generated several days before the rejection letter was dated and posted, thus eating away appeal time.

What you should do?

POPLA
If you have an invalid POPLA number, contact Richard Reeve, POPLA Tribunal Manager, on 0207 520 7202 and ask him to log the fact that you have attempted to appeal but have not been given a valid POPLA code, and that in any case the POPLA code was generated several days before it was posted. Richard Reeve and his team are well aware of this scam and will know the right procedures to follow.

To be doubly sure, write to POPLA with a copy of your UKCPS rejection letter and get a free proof of postage.

British Parking Association Ltd
The BPA Ltd are well aware of this scam but so far have taken no public action. To be fair to motorists they should require UKCPS to contact all motorists who have been given invalid codes and re-issue valid codes, properly dated with 28 days to appeal, and with instructions on how to appeal both online and via the post. Any motorist who has paid should still be given the chance to appeal even though POPLA do not normally allow this.

The DVLA are responsible for letting the BPA Ltd police their members. As the BPA Ltd are not currently pulling their weight, you should email foi@dvla.gsi.gov.uk, enclosing a copy of the UKCPS rejection letter. Ask them to investigate why the BPA Ltd have taken no visible action so far to resolve this, and ask that as the BPA Ltd are apparently not regulating the sector correctly whether their ATA status should be investigated.

Posted by Parking Prankster at 09:00