Hapless debt collection company MIL Collections, run by the incompetent Alan Davis have lost another two cases reported to the Prankster. Alan Davies has a problem with telling the truth - The Prankster hesitates to use the word perjurous because Alan Davis always fails to turn up to defend the falsehoods in his witness statements.

In the first Mr Wilkie emerged from the hills of Lancashire, to arrive for a 10am hearing at Lancaster County Court on 7/9/2016, defending MIL Collections v Mr S.

Mr S, a fine upstanding individual, apparently parked his BMW with a wheel sticking out, and North West Parking Enforcement consider this such a heinous crime as to require a £100 payment, reduced to £60 if paid within 14 days.

NWPE is an IPC Company, and as a such offer the "Skippy" Appeals service, unlike the independent service offered by BPA members. The Skippy Appeals service is essentially a biased and/or institutionally corrupt kangaroo court which uses incompetent and/or biased assessors. Its assessments are at odds with the decisions of most judges and are therefore of no use to either the motorist and the parking company.

NWPE sold the debt to MIL, who sued (no surprise there)

At court today were Mr S, Mr Wilkie and Miss Peabody, a "solicitors agent" who was asked at the outset what her right of audience was. Although the judge was satisfying he then started laying into her due to the unreasonable conduct of her client.

Unfortunately, the claim form wasn't siged by a real person, nor even the mythical Matt Murdoch/k, but by "MIL Colletions Ltd". As Miss Peabody couldn't explain why this was left to slide to the day of the court hearing, the judge dismissed the claim without even considering all of the issues, or Mr Wilkie having to actually say a word in defence of his client.

After some discussions on unreasonable conduct, costs of £119 were awarded to Mr S.

The second case did not make it as far as court.

DJ Anson sitting at Preston County Court ruled that the Gladstones-like particulars of claim were deficient and failing to meet CPR 16.4 and PD 16 paragraphs 7.3 - 7.5. He ordered MIL to file new particulars which they failed to do, and the court confirmed the claim will now be struck out. 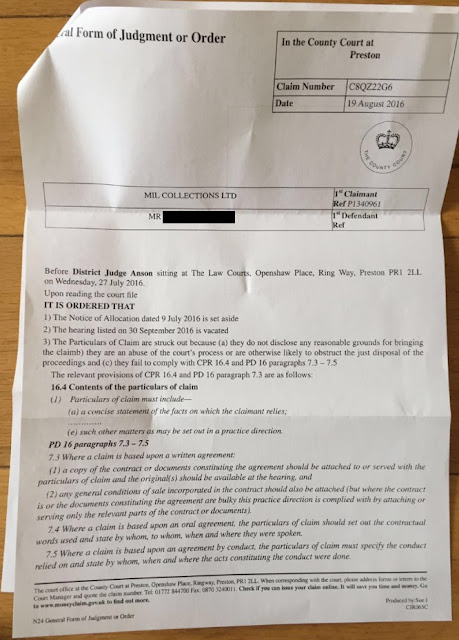 In a similar manner to the first case, the defendant also queried the signature on the claim form.

Please can it be clarified that with reference to the above claim; MIL collections are allowed to issue a Particulars of Claim without a signed statement of truth.

The Particulars of Claim in this case has been signed ‘MIL Collections’. This does not meet the requirements of the Civil Procedure Rules, which state that a claim issued by a limited company must include a statement of truth signed by a director or authorised officer (CPR r.22), thus suggesting this claim has been improperly issued.
I look forward to your response.

MIL are not known for paying court claims in good time, and as a result, Mr S will be assigning this to a company for collection. This company has issued proceedings against MIL for £102.67 this week, and hopes to add this £119 plus interest and costs to the sum that takes MIL over the
threshold of a Statutory Demand.

Strangely, MIL Outsource Ltd is registered at the same address, and the Prankster wonders how long it will be before they start issuing proceedings, MIL Collections being entirely discredited in court.

Happy to report that my case was heard this week (7th September) in Lancaster County Court and lasted about 3 minutes. An Agent did show up on behalf of MIL, although she kept referring to them as MLI (which was quite amusing!) She was clearly not well briefed and had no response when questioned by the judge about the first (of a long list) of legal anomalies. As soon as she could not answer, the Judge dismissed the case and we spent more time talking about expenses incurred that we did about the case. MIL are a hideous business with a hideous business model and I only pursued this case (with fantastic help and support from HO87 & John Wilkie) because I was determined not to line their pockets further. They rely on fear of the legal process to get people to pay up but when it actually comes to a court case they are totally inept and unable to offer any kind of coherent argument (mainly because what they are doing actually has no legal basis) I am sure that they realise they will lose in court when it gets that far but continue to this stage to demonstrate that the only way to shake them off is to go to that extreme - they know most people will not want to do this for the sake of £50 which is what they offered me to settle 2 weeks before the court date.
For what its worth my advice would be don't ignore them, that plays in to their hands and they win so either wait until the offer of £50 and settle or if you feel strongly (as I did) then push on to court and use the forums to your advantage (Parking Prankster / Pepipoo / MSE) and have your day in court - On reflection the other route is to pass your case on to private parking appeals PPA and for £19 let them do battle on your behalf.

So after 18 months I am feeling relieved, vindicated and more than anything angry towards MIL/Alan Davis/ The fictional Matt Murdoch/k - I am looking forward to getting my cheque from MIL though!

I am happy to share my experiences if they can be of any help to anyone.

Posted by Parking Prankster at 00:09