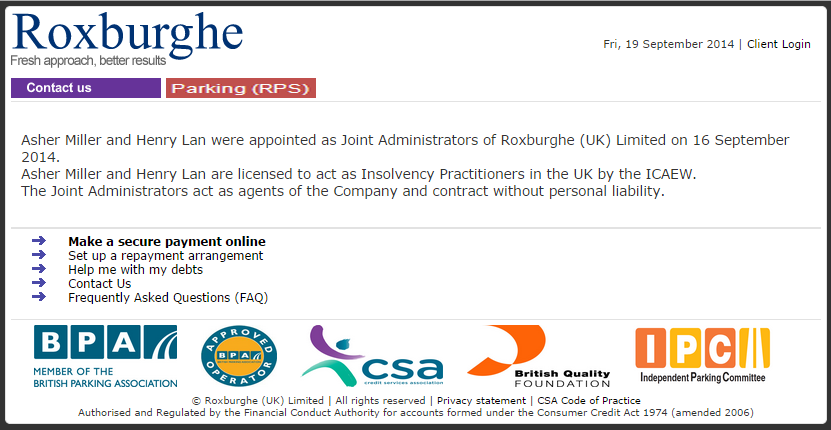 Roxburghe have gone into administration on 16 September 2014. According to one of their staff, almost everyone was made redundant with no pay, leaving only a skeleton crew.

As debt collectors, unlike bailiffs, have no legal powers, many people ignore them.

Roxburghe have previously had troubles, being banned from DVLA access for three months. In February, the OFT revoked their consumer credit licence, branding them 'unfit'. Roxburghe appealed this decision, which is still being reconsidered.

Alastair Turnbull, a solicitor who acted for Roxburghe and other firms has also been stripped of the consumer credit licence.
Gary Osner, the director of Roxburghe appears to already have a phoenix company ready, ZZPS.

Gary Osner was made a director of the British Parking Association Ltd  in July 2014. It is not known how the BPA Ltd will react to the news that as well as his company previously being unfit and barred from DVLA access, he can now add insolvency to the impressive list of credentials. Possibly they will make him joint CEO with Patrick Troy.

Posted by Parking Prankster at 08:54