Mr Phillip was being driven to the Liverpool Rowing Club one day when the driver took a wrong turn, ending up on Liverpool International Business Park. Realising her error, she turned around, and in this 32 second manoeuvre, was caught on camera by VCS who issued a Parking Charge Notice for a non-parking event. 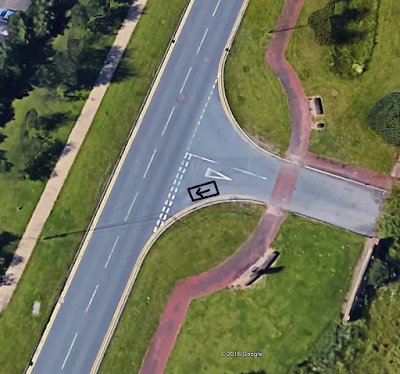 An initial appeal was rejected, as was an appeal to POPLA, as VCS were members of the BPA at the time.

VCS sent this through the gamut of debt collectors and the matter ended up as a BW-Legal Roboclaim. Unusually, the Defendant wanted to not only win the battle, but also take part in the war, and with The Prankster's assistance filed not only a solid defence, but also a counterclaim.

1) There is no contract. The signage forbids parking, even for an instant, and therefore there is no consideration. There have been a number of similar cases recently including UKPC v Masterson and PCMUK v Hall et al. This therefore is a case of trespass, and in such cases only the land owner can sue, and then only for actual damages incurred. Where there is no damage a nominal £1 is usually awarded
2) Even if the signage did offer a contract, the font size is too small and the words too many to be safely read while driving. They can therefore only be read while stopped and the normal time allowed in these situations is 5-10 minutes in car parks to allow for a genuine meeting of minds and for the driver to understand and comprehend any potential contract. There can therefore be no contract entered into by consideration.
3) Even if a contract was entered into by consideration, the signage does not contain the information required by the Consumer Contracts (Information, Cancellation And Additional Charges) Regulations 2013, enacted 13 June 2014. As per clause 13(1), without this information any contract is not binding on the consumer
4) Even if the contract was binding, the charge is a penalty and an unfair consumer charge. ParkingEye v Beavis is the leading authority on this. Although ParkingEye won the case, the judgment makes it clear that if the charge is not to be a penalty/unfair consumer charge, the driver must have ample time to be able to read and digest the contractual terms so that they can fairly agree to the terms. As this has not happened the charge is not saved from being a penalty/unfair consumer charge, and unless VCS have incurred costs of £100, the charge is excessive.

The counterclaim was based on the paperwork not being compliant with POFA and there being no possibility of a legal parking charge and therefore there was no "reasonable grounds" to pursue the keeper or driver, such pursuit being a breach of section 13(2) of the Data Protection Act 1998.

BW Legal offered a generic "no it isn't" reply to defence and counterclaim which did not answer any of the points raised in the counterclaim.

Mr Phillip filed a witness statement which included a video showing the signage from the driver's eye view, essentially proving there was no possibility that the driver could enter a contract as the signs were neither readable nor even particularly visible. He also filed as evidence relevant extracts from the Department Of Transports guides for signs on the highway. He made arrangements with the court to show the videos during the hearing.

Faced with this overwhelming defence, BW Legal discontinued the claim 12 days before the trial. Unluckily for their client VCS, they appeared to forgot there was a Counterclaim.

As the Prankster was busy with "real life (tm)" at the time, he invited a professional "Parking Terrorist", John Wilkie of Private Parking Appeals, to assist the Defendant (now the claimant in the Counterclaim) on the day. The day was today, so Mr Wilkie left Glasgow quite early to be at Liverpool County Court by 10am.

There were a number of VCS cases at Liverpool today. Messrs Pickup and Worthington and Ms VanDays were all present, but none of them were instructed in this matter. The parties were called in on time at 11.30! Mr Wilkie did have to pick up his jaw from the floor on the way into court as a result.

With no attendance from VCS or their solicitors, the Judge invited Mr Wilkie to lose the case on his own. He argued:

1) The Claim was not valid in the first instance, as the signage did not offer a parking contract, the 32 second stop was well within the 10 minute grace period, and while the ATA Code of Practice may not form a part of the Law, it DOES form part of the KADOE contract allowing reasonable cause. As such, as the CoP was breached, there were no reasonable grounds under regulation 27 for the Parking Company to seek keeper information, and this was a breach of the Data Protections Act, section 13(2)

2) Additionally, Section 13(2) does not require proof of damage, only proof of breach. Damages follow, as the court confirmed in Google v Vidal-Hall. The judge was already fully aware of this case, and cast only a brief glance over Mr Wilkie's copy.

3) Damages must be sufficient that the process of law, and the intent of the Legislation is not brought into disrepute (Purves v Joydisk Ltd[Scotland]). Nowadays, £250 is an appropriate sum to award as "nominal" damages, but sufficient to show the court's displeasure at the breach such that justice is seen to be done.

4) As such, the conduct of the claimant, in pursuing then discontinuing, and not answering the counterclaim was entirely unreasonable, and smacked of Rookes v Barnard 1964, such that Exemplary or Punitive damages ought to be awarded at ten times the initial counterclaim. This is also
supported by CPR 16.4. In deference to his duty to the court, Mr Wilkie immediately conceded that this had not been pleaded earlier, and the Claimant had no opportunity to answer this point if the judge was persuaded of its validity.

5) Finally, Under rule 27.14(2)(g) the defendant ought to be entitled to punitive costs, again for the unreasonable conduct of the Claimant in failing to attend or even have the courtesy of excusing its attendance.

In giving judgment, the Judge mentioned Mr Wilkie's "helpful submissions" and was happy that he had ably assisted the Defendant.

1) The claim by VCS, having been discontinued, is dismissed.

2) The Claimant did not have reasonable grounds to pursue the keeper - this was not a parking event, it was a stop to turn which is necessary, and implicit in a right to pass and repass. The evidence of the Defendant has not been challenged and is on its face entirely honest and reasonable. As such, the DPA breach is proven.

3) The Defendant did not need to show, or quantify damages, Google v Vidal-Hall makes it clear that damages follow the breach.

4) The quantum sought by the Defendant was entirely reasonable, pleaded from the start, and there was nothing before the court, either from the Claimant or in binding case law to go behind this figure and examine it. Accordingly, the defendant has judgment in his counterclaim in the sum of £250.

4) The conduct of the claimant did not, in this case (and in the evidence before the court), cross either the threshold of Unreasonable conduct for rule 16.4, or rule 27.14(2)(g) and so the Defendant was only entitled to nominal costs of £104.40.

Mr Phillip was delighted, and celebrated with an Americano with Milk, courtesy of Mr Wilkie. It is rumoured that Mr Wilkie's head has not yet arrived back in Glasgow, having been too big to get through the courtroom door.

"This was a critical case for the 'parking terrorists' as we have argued that the Parking Companies are breaching the DPA on a number of occasions, and this has now been confirmed by the courts. They MUST comply with the KADOE contract, and the ATA CoP to be entitled to Keeper details, and
failure to do so, such as in Excel v Mr C at Stockport, will open them up to legal action.

"While this decision is not in itself a Precedent, the Google v Vidal-Hall ruling IS binding on the lower courts, as is ParkingEye v Beavis which deals with the ATA CoP being part of the conditions that the PPC must meet (Para 94-95)

"Parking Companies will have to now understand that, even after issuing proceedings, they can be attacked on their conduct, and in the event of a loss, it would be possible for the winning defendant to issue a claim for this breach regardless of any previous hearings.

"Where there are parking companies selling their 'debts' to unregulated, unregistered companies like ZZPS or MIL, then it is possible to bring a clam against both the PPC and the Debt Collectors, before they even issue their claim against you.

This is an important case, and although not binding it does establish that where a parking company has no legitimate grounds to pursue a parking claim, they are committing a breach of the DPA.

It also establishes that £250 is a reasonable minimum amount to claim, although of course higher amounts can be claimed if justified.

Any motorist who has won a parking claim in court, or has had a parking charge cancelled by POPLA** or who has been issued a charge for stopping at Liverpool Business Park can consider issuing a claim against the parking company. The Limitations Act will apply, so this can only go back 6 years.

A number of parking companies issue claims and then back out at the last minute. Although costs are sometimes awarded against them, this is not always the case leaving defendants out of pocket and having spent time and energy for nothing. Issuing a counterclaim forces a hearing which means the defendant can claim costs.

A number of parking companies also play the numbers by failing to cancel an initial appeal, but folding at POPLA. Motorists can file claims against these companies too if a DPA breach has occurred.

Posted by Parking Prankster at 12:37