The long-awaited judgment on ParkingEye v Beavis will be handed down on Wednesday 4th November, sometime after 9.45 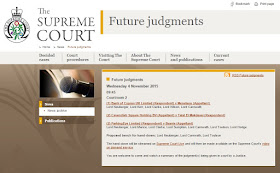 The hand-down can be watched live or later on demand, and a PDF can be downloaded from the Supreme Court web site.

Both parties counsels will already know the verdict, but are barred from telling anyone. A vigilant observer in Chorley may be able to guess the answer depending on whether the pubs run dry, or whether or not a number of boastful posts appear on parking forums, as happened after the Court of Appeal verdict.

Although a large number of people are hoping the judgment will add clarity to whether arbitrary penalties will henceforth be allowed in law, this was also hoped for in the Court of Appeal verdict - as everyone knows, this did not happen.